When Ethereum first started to gain traction around 7 or 8 years ago, I watched an early and obscure YouTube interview of Vitalik Buterin. He was 21 at the time.

Born in Russia but educated in Canada at the University of Waterloo in Kitchener, Ontario.

As the co-founder of the blockchain protocol known as Ethereum, Buterin is one of modern society’s most influential personalities.

He said something remarkably profound that I have weaved into hundreds of conversations ever since. He said:

“A homeless person today has access to more information than the robber barons of the 19th century.”

Buterin’s comment stopped me in my tracks. I literally paused the video and listened to it several times over.

He wasn’t making a social commentary about robber barons. He wasn’t admonishing the homeless.

He was painting an astonishing picture that, for the first time in human history, anyone with access to the internet, including someone who is homeless – could walk into a public library, and access or accumulate unlimited knowledge that could alter the course of their life – or the course of the world.

Today’s entrepreneurs have one thing in common – digital is part of their DNA.

At UtopiaVR, we recognize that today’s modern, digital network marketer is confronted with limitless possibilities. With the right product, the right attitude, and the right framework, the sky is the limit.

The “new” internet – which many are now calling the “metaverse” – is simple. We are shifting from a 2-dimensional online experience to a 3-dimensional world.

“This is a monumental shift,” said Stuart Gray, President of Utopia VR.

“Today’s up-and-coming entrepreneurs have truly remarkable resources at their fingertips. There have been two seismic moments in the history of network marketing.

The first was when pioneer companies paved the way for a global phenomenon, and the second was the introduction of internet technology that dramatically opened the playing field to millions more people.

The third wave is the “new” internet,” according to Gray.

“The shift to a 3D web is exciting.

Participants develop a sense of presence – and a sense of connection that doesn’t exist in today’s internet environment. It’s the closest thing to ‘being there. In the next 3-5 years, every company that owns a website is going to have a 3D version.”

That bodes well for leadership training. Men and women who subscribe to servant leadership principles have a new, interactive tool that they can use to invest what they know in others.

Call it whatever you like – giving starts the receiving process – invest in others and it will pay you dividends – and so on. There are mountains of leadership wisdom contained in the first 200 issues of The Network Marketing Magazine archives.

In the coming weeks and months, UtopiaVR is partnering with George and Debbie Madiou to bring those archives to a new, refreshing, digital 3D life… Stay tuned. 🙂

Note: To book a demo of the UtopiaVR platform designed specifically for the direct sales industry, email [email protected] and tell us you found us in The Network Marketing Magazine! 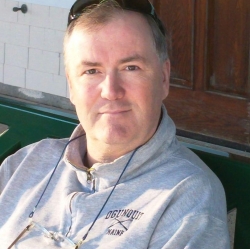 Utilizing early internet technology, Kevin rose to the top of his direct sales company in just 26 months and has earned more than $3 million in network marketing.

With a passion for technology and a finely tuned instinct for trend-spotting, Kevin is part of a team that has developed a revolutionary, first-to-market, easy-to-use platform that network marketers are going to use to build their online businesses for decades to come.

Kevin and his partners are thrilled to partner with The Network Marketing Magazine as we take the entire industry to new online heights that appeal to “the next generation” of network marketers.