200 articles later, I’m doing good, I look and feel a little older, but it has been a great experience. I had an agreement with my partner at the time, that if I didn’t have to write an article, I promised him that he never had to write a check. He gladly agreed.

Well, before we launched the first issue on October 1, 2005, he said that since this was the magazine’s inaugural issue, this one time I just needed to write an article to kick this launch off.

It seemed to make sense, so I did.

Today 200 articles later, I’m the most prolific author in The Network Marketing Magazine! I’m proud of that record since I have beat out #2 through #5, giants in the industry. Zig Ziglar, Jim Rohn, Denis Waitley, and Tom “Big Al Scheiriter! All of the runner-ups became my friends and THEY started this magazine off to become a major teaching and training resource in the network marketing industry worldwide!

Below is my very first article that has kicked off this streak. It will give you an idea of what was going through my mind about, what was to be the business passion of my life. To be a part of a movement to help those that wanted to be in a successful business of their own. This magazine has morphed from an online periodical to a resource that would use the wisdom of over 300 authors to guide a networker like a road map. Guiding like your very own upline GPS for your group.

What follows was the first that started this journey!

We’re building this business the way The Greatest Networker in the World guided me to.

I was stopped on a gravel road on the side of a mountain in Virginia just past sundown. I was afraid to pull into what I hoped was the driveway. I didn’t know if it led to the house or if I would plummet off the side of the mountain.

‘Better to get out of the pick-up and look than to drive this truck into the ditch, I thought.

It was the right move. I would have gotten my Uncle’s truck stuck. I was so close but wasn’t there yet. I could see the Greatest Networker’s house further up the hill. There were a number of lit torches along the porch railing… but where was the driveway?

I got back in the truck, put it in gear and the back tires started spinning in the gravel.

‘Damn, no traction, not enough weight in this empty pick-up truck.’

I gunned it, digging ruts in the gravel road, and began to inch my way forward, sliding up the steep driveway.

Off in the distance, I could hear that deep booming laugh of the Greatest Networker.

“Imagine this,” I thought, “The Greatest Networker is laughing at me! Is this just like jumping into the pages of his book or what?”

It was my first time visiting John Fogg at his home. A few years earlier, we had met one another when I was doing a promotion for some trainers in network marketing. We hit it off immediately.

After that undertaking, we started exploring other projects. Projects always with the goal in mind to deliver high-quality products and services to network marketers looking to truly build their business.

That’s one piece of how TheNetworkMarketingMagazine.com first started to take shape.

The character, The Greatest Networker, came from deep inside John’s relationships with a couple of great networkers, Russ DeVan and Richard Brooke, with whom he had collaborated in his own life experiences.

As our friend John Kalench taught us, “you must develop a belief in your company and products… belief in yourself… and an unshakable belief in this great industry of network marketing.”

Your company will be the place for you to get that unshakable belief in yourself and your products.

The Greatest Networker teaches that to believe is to be in love with.

The more you work on these three beliefs, the more you will fall in love with the vision of what your business can develop into for you and your family. The hope and freedom that network marketing can offer you are awesome!

Just before I first met John Fogg, I decided to pick up his classic and read it again.

I was going to interview him the next day and it had been a while since I’d read The Greatest Networker in the World. I found it in my library, put it by my bed and I didn’t fall asleep until I finished it.

The next day I called John and said, “I just read your book again. It’s the first time I read it in nine years. I can’t get over how good it got!”

That was the point.

Reading The Greatest Networker in the World, again after all that time, I identified seeds that were planted in me back when I was a baby in network marketing.

They had sprouted and helped me become a leader in the industry.

Many of the things I shared and taught my downline, and others I had mentored, came directly from what I had read in the book years before.

What I learned from The Greatest Networker In The World, not only helped me grow my business, but they are the same principles we’re using to build TheNetworkMarketingMagazine.com today.

Taking it one step at a time. Listen, really listen, to people. They will tell you what they are looking for, what’s important, really important, to them.

TheNetworkMarketingMagazine.com is a digital magazine and it will redefine what a magazine is and can do for you.

We have the ability to be in a whole new level of relationship with our readers. This is a magazine made for, about, and by our subscribers. Before the end of the year, we’ll be INTERACTIVE. Readers/writing along with the writers! And, you’ll be able to sign up for scheduled, multi-media learning via LiveOnlineMeeting (A platform that has turned into Zoom in a program, oddly enough, called the George Madiou Show) with the authors to discuss their articles and ideas! How cool is that?

We create friendships. Know, like, and trust the people you are partnering up with. Give, give, give… then give some more. That’s the only way you’ll get Value, value, value.

A friend genuinely cares. When you give in a caring way, your friendship grows. The value of your relationship grows. Everyone grows. Together.

TheNetworkMarketingMagazine.com is dedicated to giving so much value it’s silly! We call it value-added-value-value-added!

I’m very fond of a story that one of my favorite authors, Joseph F. Girzone, tells in his book, Joshua In The Holy Land. He tells of a wise man who was growing old.

His time was running out and he was concerned about his children. Times were bad and the old man had little left to provide for them. The old man’s neighbors were miserable people and he could not trust them to be kind to his children when he died, even though their children were his children’s playmates. The wise old man called in his children as well as his neighbors’ children and sat them down. Taking a sack out of the closet, he confided to them a secret. In the hills not far from their home was a very large field, which he owned.

The old man opened the sack and took out a handful of nuts that looked like acorns. “You see these nuts?” the old man asked. “Well listen to me. I have nothing to give you but these. And you, my neighbor’s children, are like my own. Each day I will give each of you a bag of these nuts. You are to go up into the hills and plant them. The next day I will give you more. And each day after that until the sacks are empty. And you are to keep this secret to yourselves.”

Years later the wise old man died. The neighbors were mean to the old man’s children and tried to turn their children against them.

In time the neighbors died, and the children were left alone. Being poor and having nowhere to earn a living, the children said to one another, “Remember the wise old man, our father, how he gave us the bags of nuts to plant? Let us go to see what happened to them.” They went up to the hills overlooking the valley, and to their surprise, there before their eyes was a vast forest of tall, beautiful, and rare trees, stretching as far as the eye could see, a rich treasure that would make them all extremely wealthy.

However, in order to gather that wealth, they had to be forever friends and work together on a piece of land that before was useless.

This is why the teachings and the principles of the Greatest Networker are so valuable. This is what we aim for at the TheNetworkMarketingMagazine.com:

I finally found the driveway a few hundred feet ahead. I had a wonderful stay with the man that created THE Greatest Networker in the World and his beautiful family. We made plans on that visit… a vision into the future… a vision of helping millions of network marketers break through the hype of striving to make thousands of MLM millionaires.

Committed instead to creating millions of network marketing thousandaires!

This is the vision for the magazine. Our mission is to be your guide, your friend, and your partner for your personal development and professional growth. 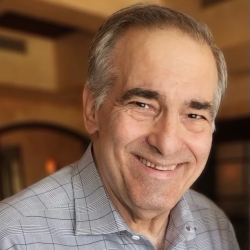 For the past 17 years, George has been the publisher and founder of The Network Marketing Magazine. He is the creator of the 27%er Success Training System, one of the most effective MLM educational platforms on the market today. He is the host of the live podcast, oddly enough called, The George Madiou Show, where he has a "conversation" with the legions and movers in the network marketing profession.

George has 2 degrees in Marketing and Management from New York University.